Who is your worst critic? Maybe it’s your mother, or an older sibling, but most likely it’s the person staring you in the mirror. Why are we so much harsher with ourselves, particularly in the areas of looks and achievements, than we are with other people?

I had a customer at work this week who tried on a fitted black dress because her friend’s daughter had invited her to be a guest at her Debutante ball. She was probably in her late 40’s and as we assessed the suitability of the dress for the event she started to point out all the tiny details of what was “wrong” with her. The greys in her hairline, the size of her bottom, the curve of her stomach, the crow’s feet around her eyes. It was all news to me because even though I was staring hard into the same mirror I literally hadn’t seen those things until she pointed them out. All I saw was a lovely, beautiful woman who had that special, comforting mum-vibe that only comes with years of experience and triumphing in hard times (people think that their gentleness of spirit cannot be seen by those who don’t know them, but it’s not true). And I realised that’s how the rest of the world probably sees her too. But she is walking around thinking people are thinking things that they aren’t, assuming they are zeroing in on her minute faults, and judging her for them. And it is damaging her self-esteem. Her own thoughts are hurting her. 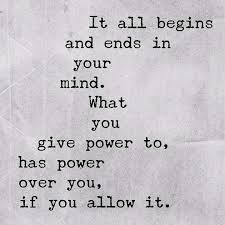 I’ve realised a long time ago that working in women’s fashion, it’s not how the garment actually looks, it’s how a woman feels about herself in it. Because, as I explained to a new team member the other day, if she doesn’t feel good about herself in it, even if she buys it she will barely ever wear it because she feels her flaws are exposed in it.

We spend so much time trying to cover our true selves, with concealer, spanks and baggy clothes (usually black, because it’s slimming, right?) because we’re afraid the world will not accept us as we are. This is a fair assumption, considering the advertising industry spends most of its money and energy telling us that we’re not good enough.

I’m reminded of another encounter as a shopper this time. I was with my friend in the U.S. about four years ago and she came out of the change rooms and asked me what I thought of the outfit she was wearing. I said, “I think it looks like you’re trying to hide the fact that you’re a woman.” Yay for honesty. She actually got quite emotional and began to open up about some deep insecurities she has about the way she looks, and how she doesn’t feel she can wear fitted clothes. That New Year’s Eve she sent me a proud photo, wearing a dress that showed her lovely feminine figure in a completely classy way. Another victory.

She was liberated to be who she was as a woman. That would be my prayer for every woman. Stop judging yourself so harshly, ladies! You are beautiful, and wonderful, and knowing that is powerful.

Trust me, most men don’t see all the little flaws either. One of my friends said her husband has asked her to stop pointing out all her miniscule imperfections because he hadn’t even noticed them.

Here’s an idea: start viewing yourself the way you view other women – as strong and beautiful and worth envying. Sincerely,
Lil (a beautiful daughter of the King)